Technological advancement has always come at the expense of jobs.

Today one farmer (with machinery and modern practices) is able to do the work that would have taken a hundred people to do a century ago.

Did this mean ninety-nine people are now out of work?

For every person who lost a job in farming there was opportunity gained to do something else.  Because of technology one farmer can feed 155 people and these 155 are now free to produce other things.

The progress of the past century would never have been possible without the layers upon layers of technological innovations that cost jobs and created opportunities for people to employ themselves elsewhere.

At each step of the way there were Luddites (those who resist labor saving technologies and innovation that might cost them their current job) and thankfully they could not hold back the march of progress or we might all still be subsidence farmers barely able to feed ourselves.

The result has been exponential economic growth and an era of prosperity unprecedented in recorded human history.  Automation may temporarily cost jobs, but the long-term result is greater productivity and with that greater wealth overall.  We have tremendous opportunity over our ancestors because of technological advancements.

Despite this, like the meme above, modern Luddites still resist technology trying to protect jobs.  They do not understand how jobs lost to machines leads to new opportunities and greater productivity that benefits them.

They would rather do like New Jersey did to protect jobs by making self-serving gas stations illegal.  It is quite literally a counterproductive economic policy because it keeps people tied down to jobs that can easily eliminated without much loss.

Innovations like vending machines, ATM’s and Redbox dispensers have added convenience.  No longer do we need to bank during banking hours or wait until Blockbuster opens to rent and return a movie.

Sure, in each case there was a potential job opportunity lost, but with each lost opportunity is an opportunity gained to do something else and a chance to add more value to the economy than would otherwise be possible.

The result is quite obviously good in overall terms… 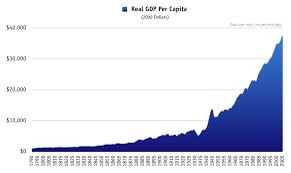 This is not to say there hasn’t been pain for some along the way.  Technological advancements (like globalization and trade) benefits the whole economy, but it also can cause suffering for those who are unemployable because they are unable to adapt and take advantage of the created opportunity.

Not every factory worker who had their job replaced with a machine (or outsourced) is intelligent or skilled enough to take advantage of the opportunity to do something else.  Sure, they do benefit from the lower prices, but also might not earn the wages they once did and can come out on the losing end.

However, most people, and certainly the economy as a whole, benefit from the greater production, the lower cost for goods and the opportunities created.  Few would actually wish to return to a time before the Industrial Revolution and our age of technological advancement.

For every job eliminated there has always been new opportunities created for more skilled labor and professional work.  That is how things have gone until this point and one might assume this is how it would continue ad infinitum.

But do all good things come to an end?

Up until now machines have been useful for eliminating back breaking and repetitive physical tasks.  As a result more people have been freed to do mental or creative work rather than manual labor.

Technology has now advanced to where we might soon reach a tipping point where all human work can be replaced.

According to the analysis of some (please watch this: Humans Need Not Apply) we are nearing a point when even the most skilled professionals and best of creative minds will be outclassed by technology…

What happens when there is zero opportunity to do something that can’t be done cheaper, more efficiently and better in every way by machines?

What happens when all human labor is worth next to nothing and only capital like land, mineral resources or machines have value?

Our future seems a paradoxical combination of utopia and hell…

On one hand, in this future we will have the capability to produce more than ever with great ease, innovation and efficiency will reach levels humanly unachievable.  This will mean more wealth than ever before and theoretically we could all eventually go on a permanent vacation.

On the other hand, most people (unless they already own land and machines with productive value) will have little to offer in economic terms and no way to advance.  The price of goods would drop, but wages would drop faster and followed to conclusion we would all be unemployed, unemployable and most of us would have nothing at all.

But it would likely never get to that point.  The real tipping point would be when a critical mass of people become unemployed, know they are unable to compete with those (who by good fortune or superior intelligence) who already are established.

There would be a revolt against the establishment.  Capital of production (machines and land) would almost need to become the property of all people.  Goods and services created would need to be distributed evenly amongst the people.

At this point, once the revolution is over, assuming the machines don’t rise up against us, all we would have left to do is contemplate our existence in a world where all other work is done.  We would spend our time exploring, being entertained by our machines, building relationships and reproducing—there would nothing else left for us to do.

That will not happen overnight.  But, with self-driving vehicles right around the corner, my current occupation (transportation) will be the first in line to go the way of the horse.  So, at very least, I need to think of what my next move will be…