For those who still remember Paul Harvey and miss his “and now you know the rest of the story” delivery style, Lance Geiger will scratch the itch. His episodes, on “The History Guy” YouTube channel, have been my entertainment in the morning before work and enjoy the storytelling adventure before his “forgotten history that deserves to be remembered” wrap-up at the end.

His show is not political. But two of the episodes sparked my thinking about the danger of ideological extremes and the need for checks and balances. One story an example of the central planning gone seriously awry, the other about the unfortunate consequences of technological development combined with market forces, and both stories involve the extinction or near extinction of a species of birds.

The first video, “When China went to war with sparrows” is about the “Four Pests Campaign” that was part of the “Great Leap Forward” from 1958 to 1962. The idea was to eliminate certain types of critters as a way to increase hygiene and reduce disease. The targets, mosquitoes, rodents, flies, and sparrows, were picked by the Socialist regime of Mao Zedong. Claiming that “birds are the public animals of capitalism,” armed with a population bound to statist fervor, they dramatically reduced the numbers of sparrows. 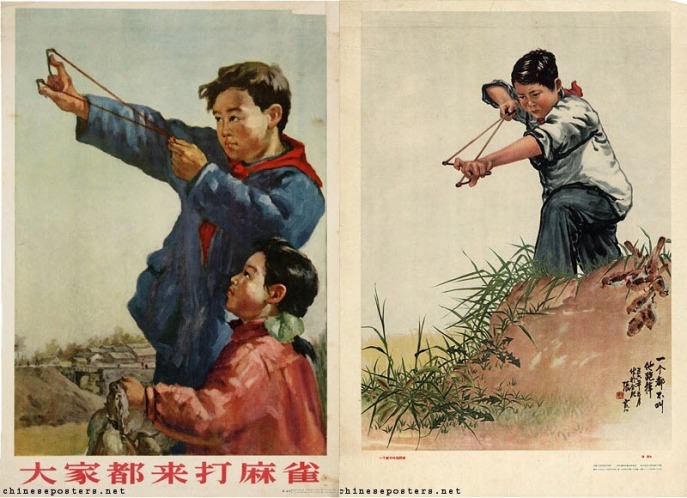 The end result of this sparrow control campaign was an ecological disaster. As it turns out, holding to Marxist ideals does not make a person an expert on economic development or biological science, and this deliberate elimination of sparrows came with some very serious consequences. This misguided policy is believed to be a leading cause of the Great Chinese Famine, a catastrophe that cost between 15 to 45 million human deaths and was abandoned when Chinese authorities, on the advice of an actual ornithologist, finally realized their terrible mistake.

Che Guevara T-shirt wearing, professional far-leftist ‘rabble-rousers’ may celebrate “people power” when it aligns with their personal prejudices. They often sit smugly and sanctimonious, on their intellectual ivory towers, confusing their book acquired knowledge and ideological indoctrination for wisdom. But given real power these people are dangerous. Mao Zedong, the well-educated son of a wealthy farmer, was not an idiot or especially ignorant. But the masses he controlled (with his anti-Capitalist rhetoric) amplified his mistakes, caused great suffering and claimed many innocent lives.

Sparrows, as it turns out, help to control locust populations. These bugs, now unrestrained by the sparrows, quickly proliferated and went on a crop-destroying rampage. This, along with the reckless use of pesticides and poisons by the Chinese government, was all well-intentioned. Likewise, there are many Socialist policies, championed in the past century in this country, that have failed us as miserably and yet continue to be touted as solutions. Unlike Mao, however, our crop of ‘progressives’ more often doubles down on their mistake, hiding behind their ever more convoluted logic, rather than ever reconsider.

The second video, “How the extinction of a species affected whiskey production,” deals with the plight of the passenger pigeon. This North American species was once so numerous that the flocks would blot out the sun was hunted to extinction, the last of the birds dying September 1, 1915.

Native Americans had hunted passenger pigeons as they were plentiful and a good source of protein. But, because of the limits of their technology and smaller population size, never put a dent in the numbers of pigeons. But this would all change with the newly arrived settlers from Europe. Trains, telegraphs, and gunpowder enabled more people to join the hunt at pigeon nesting grounds. One well-aimed blast from a two barrelled shotgun could kill as many as 61 birds and tens of thousands were slaughtered with great ease.

The real compounding factor was not the hunters, not the tools that they used, but was rather the money and markets that gave them motivation. Unlike in times past where it only made sense to hunt for only enough to sustain your own family or village, the railroads made it possible to ship vast quantities of the fowl meat to city markets back East. The apparent plentifulness of the birds masked the severe drop in their numbers and the cheap source of protein (or profit) they provided ensured the hunts would continue.

That is not to say that nobody was aware of the decline of the species. There were indeed attempts to reign in the slaughter in the mid-1800s. But these conservationist efforts never gained enough traction to make a difference, the legislation introduced too little too late, and extinction followed.

It would be easy to say this plunder of natural resources was a product of greed. But, insomuch as greed is a selfish excess, that is not an accurate diagnosis of the problem. If it were greedy or selfish for one to merely act in their own self-interest then we would all be equally guilty for breathing. The real problem is that no individual accounted for more than their own harvest. There was not nearly enough consideration for the big picture and market forces took care of the rest.

In a Capitalistic system, productive behavior rewarded. That reward is distributed to those who have the ability and motivation to work. But, without anything to hold this motivation in check, a mass of humanity can quickly become like a swarm of locust devouring everything in its path. The beauty of the Capitalistic system is that it allows people to do more to advance their own self-interests and that is also the downfall of Capitalism as well.

What Is the Moral to the Story?

“Are not two sparrows sold for a penny? Yet not one of them will fall to the ground outside your Father’s care.” (Matthew 10:29 NIV)

Perhaps if God cares about the sparrows we should as well?

In the two stories economic systems that could not be more different and produced nearly the same results. Both cases demonstrate the power of a mass of people and remind me of the demotivational poster in my bedroom (gifted from my awesome little sister) featuring a circle of skydivers and the text: “Idiocy: Never underestimate the power of stupid people in large groups.”

The poster, a satirical take on motivational posters, is meant as tongue in cheek humor and not to be taken too serious.

Nevertheless, as there is truth to every joke, the useful message is that it is prudent to stand apart from the crowd, to resist conformity and ask questions. Had enough people questioned the party propaganda or the collective actions of their profit-seeking neighbors the death of millions of Chinese and the extinction of passenger pigeons could have been avoided.

These accounts of pigeons and sparrows are also cautionary tales about two opposite ideological extremes. In Socialism the stupid decisions of a small group of people can be vastly magnified by the subjugated masses. In Capitalism the masses, motivated by profit and market forces, can become a source of terrible devastation. The central planning of collectivists and the lack thereof in individualistic and free-market systems both come with their own unique manifestations of the same risk.

It is worthwhile to note that the unchecked power of the central state, in the path century, is responsible for more deaths (due to wars, genocides, famines, etc) than any one person or group of people motivated by profit. Government policies, often favoring big corporations or particular individuals, at very least contribute as much to the problem as individual desire to profit and are, in fact, responsible for some of the worst man-made ecological disasters in modern times.

However, the properly restrained state can provide a good counterbalance to market forces, to keep the masses from acting like a runaway train unaware of the destruction at the end of the tracks and offers some necessary protection for endangered species. It is for our own long-term good that there are limits to our freedoms.

In the end, I’m not for unrestrained Capitalism anymore than I am for unrestrained government power. As much as possible I prefer to let people make their own choices and therefore, for that reason, shade towards free markets—which, when not interfered with by governments through subsidies or social programs, are the most democratic institution known to men. It is better to allow mistakes to be corrected at a lower level through bankruptcy and individual loss. That said, the extinction of the passenger pigeon speaks to the need for a collective consciousness to hold back our self-interested impulses.

Much destruction can be caused by taking a good thing too far or not keeping it properly restrained by other equally valid principles and concerns. Do not repeat the mistakes of these competing ideological extremes and their equal potential for economically or ecologically disastrous results. Remember the sparrows. Remember the pigeons.