In an article, “Filipino Diaspora: Modern-day Missionaries of the World,” the plight of Overseas Filipino Workers (OFWs) is put in a positive light as a way that the Gospel is being spread throughout the word:

Mary Jane Soriano, a 25-year college-graduate Filipino domestic worker, has been working in Hong Kong for some years. During her stay there, she always made a point to attend the Sunday Mass in a local church, even if her employer and his family belonged to another religion. Besides Mary’s humility, simplicity, hard work, honesty and other human qualities that inevitably impressed her employer is her indomitable Catholic faith the way she practiced—simple ways to keep her life and faith going and always trusting in God and pray daily, and be good and do good to others.

Indeed, God moves in mysterious ways, Christianity swept through the Roman empire as “a religion of woman and slaves” (probably because it gave hope to these disenfranchised people) and in that way this diaspora of Filipinos is bringing Christianity to the world. The message of Jesus, and the cross, is that we will suffer for the sake of his kingdom—but that, in the end, the sacrifice we make is going to be rewarded:

I have deep respect for those who aren’t missionaries as an extension of their privilege, living in behind compound walls, and entirely supported by the generosity of others. OFWs may indeed be the greatest missionaries of our time.

However, there is also a flipside, according to AsiaNews.it, in an article from 2010:

“In my tens in Saudi Arabia, I have witnessed several Catholic or Christian Filipino migrants accept Islam under duress,” said Joselyn Cabrera, a Filipino Catholic nurse working at Riyadh hospital. Because of high unemployment levels in the Philippines, more than ten million Filipinos have left to seek jobs abroad. Every day, about 3,000 leave the country. Recently, a majority has gone to Arab countries—some 600,000 in all, 200,000 in Saudi Arabia alone.

The most recent case involves a woman who was raped at work. Because of the incident, Saudi authorities accused her of unlawful extramarital sex and on 11 September jailed her in the capital.

That doesn’t sound much like missionary service. It sounds like the vulnerable being exploited, forced to convert under duress, and is unacceptable. 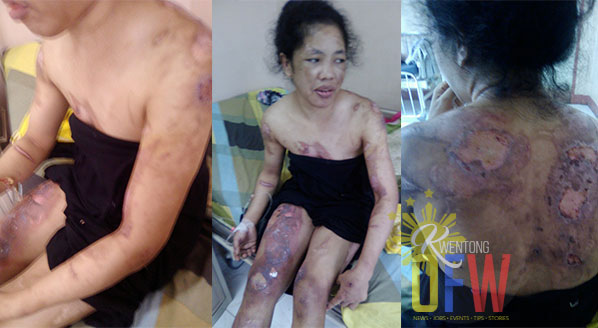 Yes, the New Testament is full of stories of Christians ensuring terrible persecution for their faith. Yes, by their example of suffering example Christianity did spread to the world. But, no, that reality does not mean there is not a terrible cost nor does it absolve us of our own responsibility to intervene.

Suffer With Those Who Suffer

We should never allow our brothers and sisters to continue to endure hardships due to our own negligence or lack of compassion. No, as Christians, we are called to be their advocate, to care for them as we would for a member of our own families, and act on their behalf of them—like St Paul did in pleading for Onesimus:

Therefore, although in Christ I could be bold and order you to do what you ought to do, yet I prefer to appeal to you on the basis of love. It is as none other than Paul—an old man and now also a prisoner of Christ Jesus— that I appeal to you for my son Onesimus, who became my son while I was in chains. (Philemon 1:8‭-‬10 NIV)

St Paul, in taking action on behalf of this runaway slave, was practicing what he preached:

This is what it means to be Christian:

Love must be sincere. Hate what is evil; cling to what is good. Be devoted to one another in love. Honor one another above yourselves. Never be lacking in zeal, but keep your spiritual fervor, serving the Lord. Be joyful in hope, patient in affliction, faithful in prayer. Share with the Lord’s people who are in need. Practice hospitality. Bless those who persecute you; bless and do not curse. Rejoice with those who rejoice; mourn with those who mourn. Live in harmony with one another. Do not be proud, but be willing to associate with people of low position. (Romans 12:9‭-‬16 NIV)

Incidentally, the description “low position” in the passage above means those who do menial tasks. That is to say the domestic worker, the migrant laborer, and all those toiling away in the factories, that make our electronic gadgets, for wages a fraction of our own. We should love them, suffer with them, and share out of our own abundance as need be. Those of us living in peace and prosperity have an obligation to help those who are currently endure terrible circumstances and especially those of the household of faith.

To be a part of the body of Christ means not being too busy with our own lives to care. It means being willing to intervene in love on behalf of OFWs around the world, to carry their cross and be an example of Christ.

Carrying the Cross of the Overseas Worker

We live in a culture that has been Christianized to the point that even secular artists now encourage Christian values. We now act as if compassion for those who are not part of our own biological families, national identity or ethnic tribe and race is something normal. That we should care about these others rather than use them as had been common prior to Christ. Take the lyrics of Pink Floyd’s, “On the Turning Away,” for example:

A Christian should never turn away from those in desperate need. We should feel the loneliness of an OFW, as those who are far from home and are separated from their families (including their own young children) for years at a time, and share their sadness. We should think about their fears, mourn the trauma of those who have been sexually assaulted and are being held captive, as slaves, by their abusive employers. We should pray, encourage and absolutely—by all means available to us—work to deliver them from their captivity and bring them home to the families they love.

Sure, it may be the job of the OFW to be a witness to the world of Christ’s love. But it is also our responsibility as fellow Christians, their brothers and sisters in Christ, to be a witness of the Gospel to them by helping to carrying their cross. If Christ himself, according to Scripture, needed help to carry his cross—then how much more does an OFW need our intervention for them? It is for this very purpose that Jesus told the disciples he would go, so that we (who are part of his body and filled with the Holy Spirit) will do greater things in his name.

But What Can We Do?

Many do have compassion. However, the problem is, how do we effectively do anything to change the circumstances for millions of people on the opposite side of the world? Even if we spent every nickel and dime we earned trying to support them and their families it would only help a fraction of those who are in need and it would do absolutely nothing to solve the actual underlying causes of this grim reality for countless Filipino people.

There is not much we as individuals can do as individuals. However there is much we can do in our working together towards a particular end. It is my hope that in my bringing awareness to this issue that others will partner with me, willing to contribute in their own small part, and together we can bring an end to the abuse.

That is why I’ve started the Filipino American Coalition of Trade (FACT) to give opportunity to those who want to make a difference for those who bear the cross as the truest missionaries of our time.

Pray for those who will spend this Christmas as slaves, sojourners in foreign lands, and victims of circumstances beyond their own control. Pray for the well-being of the OFW and their families, pray for their freedom from the economic conditions that keep them bound and separated from their loved ones, and may God be glorified in us all.